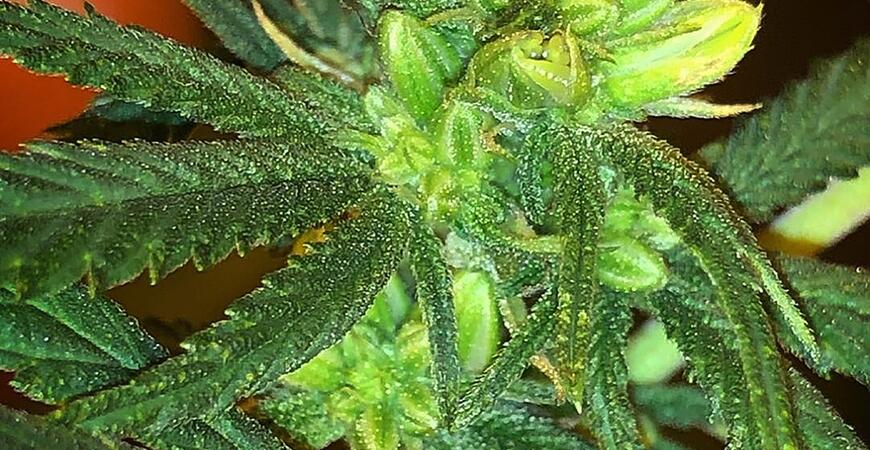 On a sunny, yet very windy, day, I met with Sean from Melting Pot Farm to have a proper sit down and discuss his approach to growing and breeding cannabis. We met at the great Watersong Recording Studio in Bowdoinham to record some audio.

Since we agreed to meet mid-morning, I stopped by Wild Oats in Brunswick and picked up some coffee and bran muffins. When we both got to the studio and settled in, we had a mid-morning breakfast together and jumped into some great conversation.

Sean and I both started cultivating cannabis well before the medical program took off here in Maine, in the former times of prohibition. We knew this about each other, and it served as a good icebreaker. We had also both worked tables at the Indoor Cannabis Farmers’ Market that IPK held in 2016, right after adult use was voted in, so we had a good idea of the circle of people we mutually knew. Other than that, we had never previously had an opportunity to sit and talk with each other.

Talking with Sean that day felt very much like talking with a friend that I had known for years, since the way back days. The fact that we could reminisce about strains from the mid-to-late 90s/early 00s that we had both grown, as well as our mutual respect for each other as long-time Maine cannabis gardeners, served as a positive foundation for the interview you are about to read.

I started the interview by asking Sean about his origins with growing the herb.

Melting Pot: “I got started growing cannabis as a late teen, based on my want for cheaper access to better cannabis. I didn’t want to have to continually be dealing with the people I was  dealing with to obtain my cannabis. I was lucky enough to find some seeds inside of some pretty good cannabis that I had sourced. From there, it made sense for me to try to put them in the ground and see what would come of it.”

Mr. Roots: “Do you think those were S1s, or you think someone maybe didn’t clip a male? Hard to tell, huh?”

Melting Pot: “Yeah those specific seeds, looking back, I assume were either cross-pollinated, feminized, or S1s. Just because it was from what we considered ‘Canadian Hydro’ back then. But, for me, it was a good source.”

Mr. Roots: “Were these some ‘Beasties’?”

Mr. Roots: “Alright! People talk a lot of shit on those but…”

Melting Pot: “There were good ‘Beasties’ back in the day. Relatively at least.”

Melting Pot: “Hey, back then you were pretty spiffy if you had them.”

Melting Pot: “Yup, I cracked some S1s in Dixie cups behind a filing cabinet in my bedroom. I got caught, very quickly. I came to a crossroads in my life, and my mother said...the words that I still hear in my head now: ‘You’re going to burn the house down! Take those things and put them in a closet would ya!’”

Melting Pot: “Yeah! Instead of telling me to throw them out, instead of grounding me, she said, ‘What are you crazy?! You don’t put a light behind a file cabinet! You’re going to burn our house down!’”

Mr. Roots: “She progressed your growing right there!”

Melting Pot: “She could have put the stop to it, and I could be a shoe salesman right now.”

Mr. Roots: “So, how did you get started with breeding the plant?”

Melting Pot: “Again, I think it just made sense to me. I got to the point where I was purchasing seed packs, and back in the mid 90s seed packs were extremely expensive. There were only a few spots you could get them.

“I took a trip to Amsterdam in my late teens and...I goofed, and...somehow, accidentally, when I got home there were some seeds that had found their way into my bag. I was lucky enough to have friends, and we traded some seeds. So in the late 90s, I had a nice little collection of some stuff to work with, and it seemed to make sense to multiply there. It just made sense to try to back them up and have a bigger lot to search through.”

Mr. Roots: “Right. What were the names of some of those strains that made their way back here, luckily?”

Melting Pot: “Luckily. Yeah, we had Sage, Blueberry, and we had White Widow from Greenhouse. Sheherazade. A lot of them have lived on, and some of them have kind of vanished. White Russian, which is an AK 47 X White Widow hybrid, was my first expensive seed pack. Ugh, the day I grabbed that seed pack, and I had it in my hands...it was no longer just a picture in a magazine...it was important.

“So, from there, I just lucked out, the first seeds were just accidentally put together, and I’ve kept it moving.”

Mr. Roots: “Nice. Do you prefer to flower from seeds or clones? A lot of people go back and forth with that.”

Melting Pot: “I generally go from seed. Uh, actually, a lot of it comes down to, you know, my goal. I usually ask myself before any venture: ‘what is my goal?’ I usually work my way backwards from a goal. If I only have eight seeds that are extremely special to me, I may back them all up multiple times before I ever flower them. I want to see if they have any different tendencies to show phenotypic differences from seed or from clone. A lot of it comes down to the value I see from the number of seeds I have to start with.

Mr. Roots: “Yeah, that makes a lot of sense. What do you think about people making crosses and releasing them untested?”

Melting Pot: “I understand that everyone comes from a different spot. So, it doesn’t surprise me. It doesn’t outrage me, and I know that there are people who are just trying to get by. Some people are trying to get by financially, some people are filling gaps socially, some people just need to feel like they are a part of something. All of those are reasons for them to make seeds and sell them, and I’m not going to tell anyone that I don’t agree with what they are doing. I wouldn’t support it. I wouldn’t go out of my way to support someone who is doing something like that, but I also wouldn’t put energy into calling them out.”

Mr. Roots: “Nice, that is a very non-judgemental way to approach it. Because it is very common. I respect that approach you have.”

Melting Pot: “As time goes on, it’s about what is being supported. You would almost have to critique the customers more heavily than you would the sellers. If they are supporting something that doesn’t have a foundation...I guess I would have to take a whole other role in life, and that would be to take a megaphone and tell everyone what I think is right and wrong with the world. Maybe 20 years ago.”

Mr. Roots: “I saw a picture on Instagram of a gorgeous Sunset Sherbert X Lemon Tree stud that you have. How often are you seeing resin on males in your sifts, with those that are non-reversed?”

Melting Pot: “In regular seeds, I see it more rarely. In reversals, the plant seems to hold onto more of its feminine traits, even though it’s passing pollen and showing male sex parts. It's crazy; it just shows that there is no end to the learning with any of this stuff. Five or eight years ago, that was a big part of what I was looking for. If I came across a male with resin, you know, you get excited, and it makes you think ‘this is the one’ because it's going to pass that trait on.

“But now, based on what I am still learning—and being lucky enough to take in information from people who have been doing this longer,—is that resin, just like stigmas...10 years ago you were told, ‘those are the traits you are looking for because they will pass on traits.’ Now I am learning that maybe some of that advice was taken based on the strength of these peoples’ names. Now I am realizing, if you are making regular seeds, those traits are actually feminine traits. So you wouldn’t want to use them in regular lines. It should be a cue that they are apt to be more intersexed. I wouldn’t have even taken that into account until very recently.”

Mr. Roots: “Very interesting advice there. There is the assumption that resin males are going to pass on even more trichome production and be a better hash strain.”

Melting Pot: “If someone ran all that right in front of me, and I saw that, I may sway back and reconsider it again. Now the people that I look up to are all reinforcing the other side.”

Mr. Roots: “It’s good to stay open-minded in this field because so much has not yet been vetted as a result of the oppression of the plant.”

Melting Pot: “You got it. There is always someone who has seen more and done more, and if you are not open to what they have to say because you have already come to your own conclusions then, you know, you’re in the wrong business.”

Mr. Roots: “So, the Pie Dough male, that I noticed. Did you select that male?”

Melting Pot: “That’s a feminized girl. She’s seemingly getting pretty well-known in the Northeast. It is Animal Cookies X Stardawg (made by a gentleman out west by the name of ‘True Grit’) that was hybridized and feminized  with Cannarado Genetics’  infamous Grape Pie clone, which is Grape Stomper crossed to Cherry Pie. That pack was sourced by a local Mainer named Megaraw Melts. His #4 that came from that pack is an extremely special specimen. I’m not very well-versed in the hash game; Megaraw could give you a little more info on the percentages and all those things. What it comes down to is that she is a provider when it comes to resin.”

Mr. Roots: “I’ve taken a couple of dabs of that with my buddy Bang Melts. Woo! Tasty stuff!”

Melting Pot: “Yeah! Exactly! Flavors...It’s fulfilling. Satisfaction all around. It doesn’t leave you needing to smoke anything afterwards. So the male version of that clone was a reversal that I did for Megaraw Melts. He was one of the very few people who got packs of Pie Dough, so it was just a way to up the numbers of seeds.

“His brand now is the home of Pie Dough. I think that is how you can gain security in this business today. By breaking through with something from your own pocket that you are confident with. If your product sells itself like the Pie Dough does, you gain your security because you are out of the race of trying to track down the next clone.”

Mr Roots: “Alright, Sean from Melting Pot Farm, blessings to you man. I really appreciate you taking the time to meet up and discuss your approach to growing and breeding. Thanks so much.”

Melting Pot: “I really appreciate it. It’s been fun.”

This interview was recorded and released as episodes 1 and 2 for IN THE TREES PODCAST, which can be listened to on Apple Podcasts, Spotify, or by visiting inthetreespodcast.com.

Melting Pot Farm can be found on Instagram @meltingpotfarm.

Medical patients are highly encouraged to check out his amazing flower at fine caregiver stores like Sinsemilla 207 in Lewiston.

Mr. Roots can be reached @alightforhealth. An avid gardener and 20+ year cannabis grower, he is also the founder and host of the IN THE TREES PODCAST. 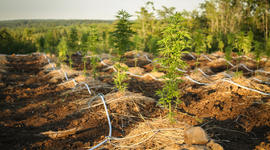 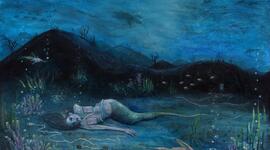