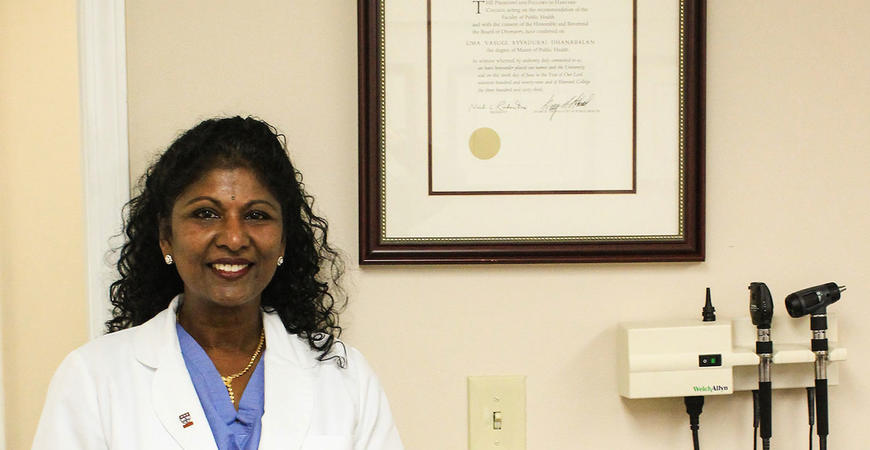 When you first meet Dr. Uma Dhanabalan, or Dr. Uma, it’s hard to believe anyone could be so positively radiant, so a skeptic’s defenses go up almost immediately. But then you come to realize that she’s genuinely just that radiant, just that joyful, and just that committed to serving others. Her conviction in the plant’s healing powers long ago gave her the courage to defy gravity - and the traditional medical establishment - to openly practice cannabis medicine. Once deemed a fringe sector of medicine, physicians like Dr. Uma are pioneering new treatments for their patients - all while forging a path for future providers.

Like many medical providers, Dr. Uma did not start out intending to include cannabis in her medical practice. It was not until her mother pointed out a television show talking about cannabis being used as a medicine in Israel, about three years prior to her 2012 passing. She said, “They’re using ganja!”

Following her mother’s death, Dr. Uma started viewing the world a little differently. “I started to say, ‘I have a choice in what I do or don’t do.’ I started writing recommendations. In fact, July 20 marked seven years ago that I started to write the first recommendations for medical marijuana in the state of Washington.”

Her background had been in occupational medicine, specifically in examining how toxic chemicals can lead to different types of illnesses in the long run, thus putting her on the path to preventative medicine. In the late 90s, she traveled all over the Asia Pacific doing employee drug tests for the company she worked for.

“That was my world, and for the last seven years, my life has been about making sure everyone does test positive. I flipped a 180. I really believe that people that do test positive for THC should be given a credit on their health insurance.”

Dr. Uma gives a lot of credit to her parents, particularly her mother, saying, “When I see myself, I sometimes think it’s my mother speaking through me. She was amazing. My mother herself was the first woman in Southern India in 1959 to get her Masters in Statistics. It took 12 years for the next woman to get her masters. She was a pioneer and encouraged me to study medicine.”

Dr. Uma continues, “She was amazing. She should’ve been a doctor. I think that’s why when people didn’t encourage women and said why don’t you become a wife and a house maker. They never supported a woman doctor. I was very much supported by my mom and dad. I started med school four times in my life when I started for the fourth time, my son was a year and a half, and my husband was in India, and I was working part-time doing research and going to med school.”

“As a student, we didn’t have health care. It was a basic need, and it’s always been important. As far as the cannabis world, it’s become a part of my life now for the last seven years. It has grown as a foundation. I created my company Global Health and Hygiene Solutions in 2006, and my mission has been to promote wellness and prevent illness, and I had no clue that cannabis would become part of my toolkit to use for so many people. I love what I do.”

Her practice has recently expanded to include pediatrics, a complicated area for practicing medical professionals where cannabis is concerned.

“It seems frustrating to me that doctors can write massive scripts for opioids. But if it’s cannabis, it’s stopped. Nowadays, we expect medical professionals not to be chastised, but a decade ago someone could lose their entire license - just for having the audacity to speak the truth.”

The extra hoops practicing providers must go through frustrate parents and physicians alike. “The system has made it very difficult for pediatric care,” Dr. Uma explains. “You need two other signatures besides the doctor that ordered it.” As someone who trains other doctors, she continually make the point that her signature should be enough, but there remains work to be done in pediatrics on this front.

And as medical practice develops in the cannabis field, Dr. Uma laments the lack of education available to incoming and long-minted physicians. She says, “I am not your typical doctor. At least I’ve had many, many years of education beyond my MD, and even with all my years of education, I was never taught about the endocannabinoid system. Right now, only 15 percent of medical schools teach it. So we aren't there yet.”

While India may not be on the front lines of womens’ advancement and empowerment, Dr. Uma has become a pioneer, applying both to medicine. She is quick to remind us that traditional Indian “Ayurvedic” medicine has included cannabis in its practice for millennia. “Cannabis was listed as a sacred plant in this knowledge of medicine, thousands of years ago.In 1833, Dr. William Oshuanse first learned about this plant from the Doctors Kolkata in India.”

Her life’s work stems from this blend of ancient holistic medicine with modern western advancements, and she centers her practice around three keywords that sum up that nexus: educate, embrace, empower.

From that center, she has brought health and healing to her patients, utilizing cannabis to treat a wide swath of ailments and aches. While most people’s facial expressions turn dour when speaking about the opioid crisis, Dr. Uma’s lights up like a preacher just about to bring a Revival sermon. Her work has helped patients move from deadly opioid pharmaceuticals to the pain relief of cannabis. It’s not just the physical pain she is treating, but an emotional and often spiritual pain.

“Cannabis is not an entrance drug,” says Dr. Uma,in sharp contrast to the “gateway drug” paranoia pushed by prohibitionists. “Cannabis is an exit drug from pharmaceuticals and narcotics.”

And like a Revival preacher, Dr. Uma is bringing joy and light to her work, lifting up her patients and rooms of people with her hope, her determination, and real science.

If you’d like to learn more about Dr. Uma, visit www.UpliftingHealthandWellness.com.

Max Salunek contributed to this article.