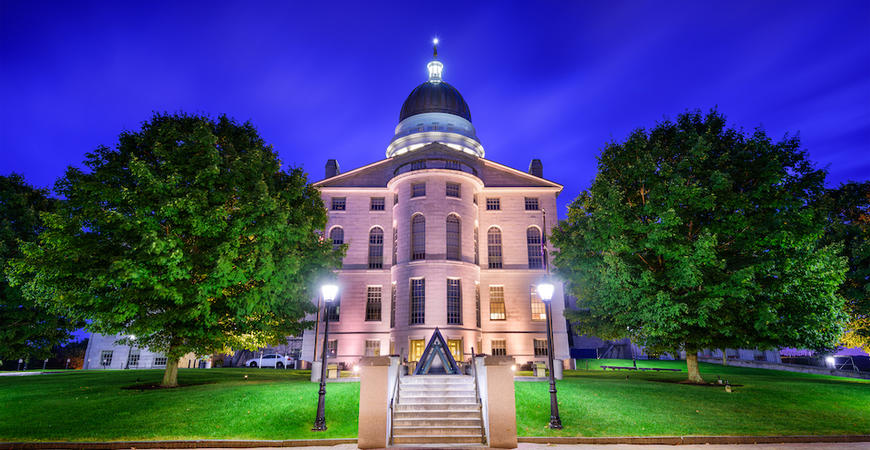 If you came away from my last Maine Cannabis Chronicle legislative update with a sense of despair, worry not; some progress has been made since we went “Straight to the Dome” in the spring issue.

The state of Maine, after dropping its first contract with METRC for adult-use seed-to-sale tracking, decided to take up the offer from the Florida-based biotech company to track the medical program instead. BioTrackTHC’s system will be used for the budding adult use market. These systems will be used to track Maine cannabis along the process from cultivation, to production, to retail. Now that the legislature and Governor have approved the rules package from the Office of Marijuana Policy, this process can finally begin in earnest. We are looking at early 2020 for the first adult use sales of legal cannabis in Maine.

You’re not stoned, (well, you might be) but it’s taken a while to get here.

Maine voters passed Question 1 in November 2016 to make cannabis legal for adults over 21. The legislature’s Marijuana Legalization Committee met for much of 2017, holding hearings, work sessions, and submitting two bills. Many were left to wonder what all the work was for when then Governor LePage vetoed both attempts to implement the adult use market. It seems like the only changes that came out of the long process were a reduction in the number of flowering plants in a personal garden from six to three, and a ban on social clubs.

Now, not only are Mainers allowed to grow much less than they intended after passage of Question 1, they also don’t have a place to consume cannabis products legally outside of a private residence. It’s been frustrating for industry entrepreneurs and consumers alike.

The sad part is that when all is said and done, Maine will be the state which took the longest to get its legal cannabis market up and running. The western states that legalized in 2012 and 2016 all had sales within two years of the vote. Massachusetts had its first adult use cannabis sales the week of Thanksgiving last year, barely more than two years following their vote.

The absurd delay in Maine has harmed many folks who were ready to jump in feet first once legalization happened. Some entrepreneurs have been sitting on empty warehouse space waiting for the state to get its act together. Could you imagine paying rent on a building for two years or more before you could do anything with it? This was a gamble in itself since each town would have to approve every site along its own cannabis business guidelines. However, the state has been responsible for most of the headaches up to this point.

Mainers are used to seeing cannabis stores, despite what status quo politicians and prohibitionists would have you believe. Since the legislature passed an expansion of the medical program last year, dozens of caregiver storefronts have popped up in our cities. Just drive down Portland’s Forest Ave or Lisbon Street in Lewiston for a micro-tour of boutique cannabis shops.

Adding insult to injury, the Governor of Illinois just signed a sweeping bill making that state the first in the country to establish a legal cannabis market through the legislative process. Every other state has legalized cannabis at the ballot box.

The early stages of adult-use policy are the most crucial for holding space against the black market and eventually squeezing it out. For this reason, policymakers should stake out and hold a tax rate low enough to allow the new legal industry to gain a foothold.

As new adult use rules coming into effect this September, Maine’s cannabis entrepreneurs will have to wrestle with a tax rate around 20%, with a 10% excise tax and another 10% levied on retail sales. Many say that consumers will only see the sales tax, but they will most definitely feel the excise tax as well.

More importantly, as the legal cannabis market takes root in more US states, consumers will be choosing state markets not just by the quality of product or the prevalence of reliable pot shops, but by the tax rates. Our regional neighbor, Massachusetts imposes a 17% tax on cannabis at the state level, while towns can tack on an extra 3% for themselves. This leaves Maine about equal to Massachusetts in that regard. Compare that with a 30% effective tax rate in Colorado and 37% in Washington, the grass on this coast is looking greener and greener.

Research on tax rates from organizations like the Tax Foundation regularly point to the counterintuitive effects of low tax rates. Lower rates are likely to bring in more taxes because of the way they stimulate consumers to spend and businesses to invest. As the saying goes, “if you want less of something, tax it,” but this does not occur in a vacuum. Short-sighted politicians will see the tax rates as a way to suppress the cannabis industry, but they forget that the old heads are used to operating outside of their system for a very long time. Hopefully policy makers will soon learn to welcome the newly legal market and bring entrepreneurs, investors, and consumers into the fold, not to push them away.

Granted, delays in regulation are better than maintaining the ever-failing policy of prohibition. We’ve seen the horrible consequences that arise when people are arrested, property seized, and families torn apart because of outdated laws concerning a mildly psychoactive herb.

We could revert back to that world if legal cannabis becomes too expensive, or regulations for business become too onerous. Since Maine has had a decentralized, lightly-regulated medical program for almost 20 years, consumers are used to having access (whether sanctioned or not) to high-quality, affordable cannabis. If the politicians and bureaucrats in Augusta overlook this fact, they will have failed to keep the new adult use market competitive with the black market.

Many Mainers know a caregiver, or someone who cultivates their own stash. It won’t take much pressure for folks to fall back into old habits and purchase their herb untaxed and unregulated. Taxes that are too high will drive the price higher than black market dealers offer. It’s a simple economic equation. We must keep the new market competitive. It would help if it were open.


NICK MURRAY lives in Auburn, Maine and works as a fundraiser in the nonprofit world. He has been an activist for causes related to drug policy reform and individual liberty since he founded the first chapter of NORML at the University of New Hampshire in 2010. Views expressed in his writing are his alone.