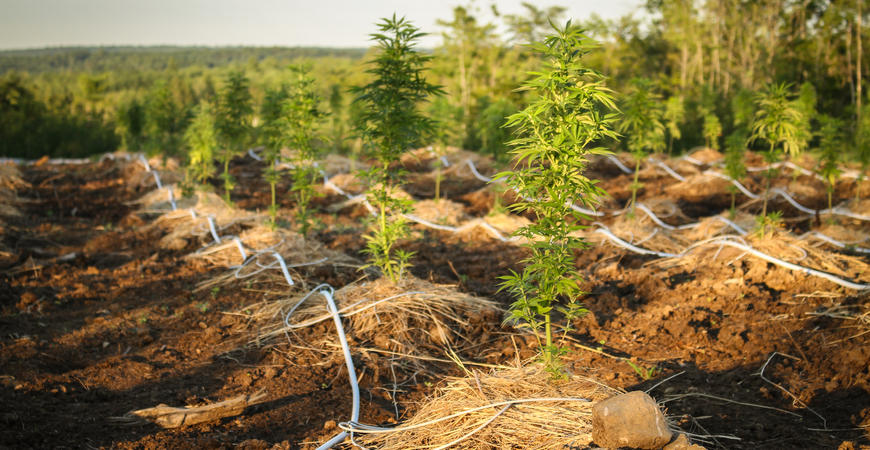 Commercial hemp production in Maine has been legal since the passage of the 2018 Farm Bill, and the State of Maine has been happily collecting application and licensing fees from farmers ($100 application fee, $500 license fee, plus $50 per acre planted), pursuant to 7 MSRA §2231 since 2015.

Taryn and Ben Marcus of Whitefield saw no reason not to climb aboard the hemp bandwagon. Experienced farmers, they had been in operation as Sheepscot General Farm on 180 acres since 2011, so they knew all about compliance with state laws and regulations. They followed all the rules, completed their application, and made payments to the State of Maine for licensing and to Acadia Insurance for their usual coverages on their home, a general store, and farm. They were also granted a loan from Camden National Bank for a produce cooler for their new crop.

Despite having done everything by the book, the Marcuses were in for a rude awakening when they began advertising their pick-your-own hemp operation: Camden National called the $12,000 loan for the cooler and closed all their accounts. Likewise, Acadia Insurance abruptly dropped their coverage, not just on their 180-acre farm, but also on their store and residence.

How could Sheepscot General Farm run so terribly afoul of their insurance company and bank when their operation was duly licensed and regulated by the state? The unfortunate truth is that despite having state laws and regulations in place, Maine farmers are still stymied by legislative and regulatory foot-dragging at the USDA and in Congress.

The 2018 Farm Bill (also known as the 2018 Agriculture Improvement Act), tasked the USDA with drafting regulations for commercial hemp farming. Specifically, Subtitle G, 297D(a)(1)(A) states, “The Secretary shall promulgate regulations and guidelines to implement this subtitle as expeditiously as practicable,” [emphasis mine] and under Subtitle G, 297D(a)(2), “The Secretary shall annually submit to the Committee on Agriculture of the House of Representatives and the Committee on Agriculture, Nutrition, and Forestry of the Senate a report containing updates on the implementation of this subtitle.”

According to a July 2019 update to the USDA website, “It is USDA’s intention to have regulations in effect by the Fall of 2019 to accommodate the 2020 planting season.  Should a state or tribal nation submit a plan before that time, USDA will not review or approve such plans until regulations are implemented.”

The USDA’s “as expeditiously as practicable” has now stretched from December 20, 2018, the date the Farm Bill was signed into law, until very recently. On October 29, 2019, the USDA held a press conference during which they announced that interim final rules for cultivation of hemp had been drafted and would take effect upon publication in the Federal Register, which they estimated would take place on October 31, 2019. The 2020 growing season will be a “test drive” season for the rules, after which revisions will be made and final rules published.

Now that the USDA has drafted its interim final rules, the State of Maine can now begin work on its own guidelines. While the legislature has already enacted Legislative Document 1749, to take effect December 1, 2019, the Maine Department of Agriculture, Conservation, and Forestry rules must now be reviewed and revised as needed to ensure that they are not in any way less restrictive than the federal rules. It is unclear whether the necessary reviews will take place and regulations brought into compliance in time for the 2020 growing season.

While this week’s developments at the USDA constitute progress in the right direction, Maine hemp farmers are fighting on yet another front: the fight to be able to purchase insurance and to have access to banking services.

In Congress, H.R. 1595, the Secure and Fair Enforcement Banking Act (SAFE Banking Act), is another bill that brings the hemp and cannabis industries one step closer to being able to conduct their legal business in Maine. The SAFE Act, which passed 321-103 in the House of Representatives on September 25, 2019, is designed “to increase public safety by ensuring access to financial services to cannabis-related legitimate businesses and service providers and reducing the amount of cash at such businesses.”

The SAFE Banking Act was also introduced in the Senate as S. 1200 on April 11, 2019, sponsored by Jeff Merkley (D-OR) and cosponsored by Angus King (I-ME). The bill was referred to the Committee on Banking, Housing, and Urban Affairs, but no action has been recorded since. Unfortunately, Senate Majority Leader Mitch McConnell (R-KY) has not allowed the SAFE Banking Act to reach the Senate floor for a vote.

We reached out via phone and email to both Sen. Angus King (I-ME) and Sen. Susan Collins (R-ME) to follow up on the progress of the SAFE Banking Act and request specifics of what they had done to bring the legislation to the Senate floor for a vote.

The response from Annie Clark, Sen. Collins’ communications director, sounded a lot like those voicemail recordings that say, “Your call is very important to us.” She stated, “Sen. Collins supports efforts to change federal banking laws so that financial institutions in Maine and other states that have legalized state-licensed cannabis businesses are not penalized for providing banking services to them. It is dangerous in those states for those involved to be forced to have a cash-only business for paying their employees and bills because they cannot use banks and credit unions.” When asked for specifics on what Sen. Collins has done to help bring this bill to the floor, there was no response.

Specifically citing the Marcus family in the letter, King said, “People like Taryn and Ben Marcus, who own Sheepscot General Farm in Whitefield, Maine, have suffered due to the lack of hemp banking regulation. Taryn and Ben are hemp farmers who have done everything right.”

He went on to say, “Hemp businesses in Maine face banking access issues that threaten the viability of their operations. They need our help. I urge you to mark up the House-passed SAFE Banking Act (H.R.1595) and report this important legislation out of the Committee on Banking, Housing, and Urban Affairs speedily so that our hemp businesses can obtain the financial services they require.”