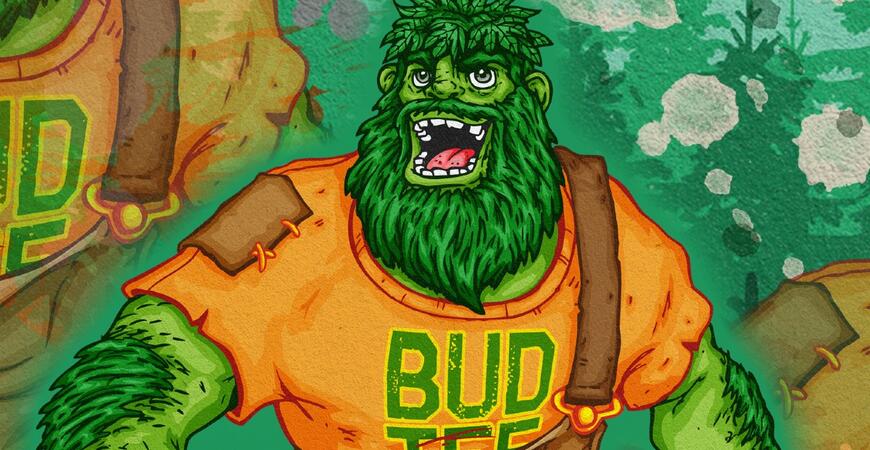 Walking into the brightly lit workspace of Bud Tee Co. feels like walking onto the set of an episode of Seinfeld that takes place in an automotive sweatshirt paint factory. Stacks of T-shirts and hoodies with names anyone in the game would recognize are stacked on tables and spilling out of boxes. A rotating cast of faces can be seen on any given day, poking their heads through the window cut in the wall—Kramer style—to pick up orders, hop on a press, or just shoot the shit. Notes are scrawled here and there, and one door is covered top to bottom in brand stickers—my favorite being a little cupcake that says “Cake Dealer.” This is clearly “Not Your Cousin’s Print Shop,” and what appears chaotic at first reflects the genius-bordering-on-madness mind of the man himself—Bud.

A Portland native who moved to the Maine countryside, Bud started his career going to vocational school for graphic communications. The tender age of 18 had him working at a local sign and print shop, where he was transformed forever into a “shop troll” (his words), chained to the printing press for 40 hours a week. Here he wrapped sheriff vehicles and fire trucks, an irony not lost on me as I spy the MIDS POLICE hoodies hanging from the racks. While I don’t think any cop cars will be sporting his handiwork anytime soon, he is still in the wrap game—if you’ve seen a Mr. Tuna or High Roller Lobster truck, you’ve seen his handiwork.

Bud received a gold medal in advertising design from Skills USA, a vocational organization that unites students, teachers, and industry professionals with the goal of ensuring a skilled workforce. He still judges T-shirt competitions to encourage another generation of printers along on their journeys toward printing their own dank designs—his way of giving back in his field while also keeping up with changes in printing technology.

Like most creative types in today’s day and age, Bud moonlit in the restaurant industry, working close to two full-time jobs in his early years. The moment I first spoke to Bud, I would have put money on him having worked as a line cook. A lifelong waitress recognizes the tell-tale signs, and his off-color, raunchy humor makes me feel at home in what has otherwise become an increasingly PC world. It is apparent that his time on the line instilled in him the industry mentality, which he has carried through to other stages of his life and now to the cannabis industry.

In 2008, he was working at a shop in Portland printing shirts for radio stations, high school sports teams, and the like. That wasn’t scratching the itch for him, though, so when his friend Bobby invited him in 2011 to come work as the printer for Shop Chronic in Gardiner, he jumped at the chance. Shirts were printed en masse and brought to the Boston Freedom Fest and other notable events where they sold out time after time. The designs they were putting out, and the two e-nails with rigs setup for dabs, ensured their booth was consistently the most popular. With that success, the seeds were planted for what would become Bud Tee Co.

When Bud branched out on his own four years ago, he was printing apparel for restaurants, bars, and carpentry and landscaping businesses. But the seed had germinated, and a year ago it was finally ready to sprout, as more and more independent growers started finding him. He talked an old friend, Sticky Claws, into moving back to Portland with a very persuasive argument, “Let’s just do weed shit, man!” He rebranded to BTC in 2019, said goodbye to 80% of his clients, and began focusing almost exclusively on cannabis industry work. When asked why, Bud said he had been “selling weed since the eighth grade, but got out when it got legal,” yet he never lost the desire to mix work with pleasure. On top of that, “I know things can be done another way,” Bud said. In addition to printing apparel for a hundred different brands, BTC features gear that sports original designs with inside jokes for those that constitute the backbone of the growing cannabis industry. Like every line cook I’ve ever met, Bud loves inside jokes.

Bud trademarked the phrase CANNABIS ENTHUSIAST, which he says is “for the people.” Soon, he’ll be launching Maine Weed Tees, where the dedicated cannoisseur can find collector’s tees from different growers. When you think about it, these could be like the Beanie Babies of our time, as different brands emerge, thrive, or fail. Who will go down in history, at this turning point in the end of the war on drugs, as cannabis becomes legitimized? What clever shirts will be made and in what limited quantities? Bud’s  goal is to provide elevated stoner gear of a “higher” quality than the Hot Topic pot tees of yore. His favorite designs of the moment are Atlantic Farms for the clever simplicity of their logo and Brigid Farm for a classic athletic look.

Bud’s favorite strain is Dead Head OG Kush from Capital Cultivation—energetic and low anxiety. His preferred method of intake is shatter and concentrates, but he “tries not to be a terp slurper.” When asked how cannabis affects his own work, he cites “state-dependent learning,” some things about his process he learned to do while high and therefore he does them better while high. He uses cannabis for creativity and finds it best for tasks that require accessing a flow-state, like working the printing press.

Bud thrives on local energy and likes to be dependable. He prides himself on holding his work to printing industry standards, but says it is tough to be a small business and deal with people who don’t understand the process (or that he’s for the most part a one-man-show with guest stars). Last-minute orders, late deposits, and people who expect a one-week turnaround on a six-color design really grind his gears, as do after-hours social media DMs that customers treat like official correspondence. “Do I hit you up at 10 p.m. about your job? No.” And don’t get him started on order forms.

Bud’s dream is to continue down the rabbit hole, adding on new printing methods like simulated processing, incorporating gold foil, and creating more original designs. He says there’s “lots he can do, but can’t do it for everybody,” and so he avoids any sort of competitive energy. He’s more interested in building community, and while he wants to be known as the cannabis industry print shop, he says there is more than enough work to go around. He also admits, “I’m not for everybody.” It does take a quick mind to keep up with Bud’s dialogue, but if you appreciate fast-paced, multi-layered jokes or thought the movie “Waiting” was a riot, stop by the print shop and stick your head through the window. Just make sure you make an entrance befitting a sitcom.